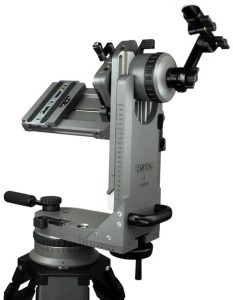 Providing a high level of operational flexibility, this Fluid Head can be easily fitted to a wide range of supports including tripods, dollies, cranes and camera cars. The mounting can be inverted in under-slung position for low line positioning and allow the camera to be moved all the way to the ground and provide for accurate images which normally cannot be obtained with other traditional supports.

The balance system is designed so that the camera may swing on its center of gravity and rotate 360° on its vertical axis. No springs or similar counter reaction elements are required to set the head in a fixed tilt position and fluid pan and tilt movements have the same identical feel. The lens focal distance can be kept constant by presetting the fore and aft horizontal sliding plate.

The LAMBDA employs the patented CARTONI fluid drag control system on both pan and tilt modes.